This digital edition is supplied as an ePub3 file. It is a complete and unabridged version in a full-colour, fixed-layout format, which can be conveniently viewed on your phone or tablet with quick-link contents allowing you to jump instantly to the section you want to read. You’ll need an ePub3 reader app to take advantage of this – see our recommendations, which feature bookmarking abilities, here.

Lost in the vastness of space, the craftworlds float in utter isolation like scattered jewels upon a pall of velvet. Distant from the warmth of sun or planet, their domes gaze into the darkness of empty space. within them live the survivors of a civilisation abandoned long ago amidst terrifying destruction. These are the Aeldari, a race that is all but extinct, the last remnants of a people whose mere dreams once overturned worlds and quenched suns.

Codex: Craftworlds contains a wealth of background and rules – the definitive book for Craftworld Aeldari collectors. Within, you’ll find:

- Remnants of the Fall: the origins of the Craftworld Aeldari, their glittering rise and tragic fall, and the ongoing, desperate struggle for survival that consumes them utterly;
- Organisation of Craftworld warhosts, along with the strategic disposition of Aeldari Craftworlds – this includes a breakdown of the colours, symbols and iconography of the worlds that remain, and the structure of their armies;
- Detailed background and heraldry of the following Craftworlds: Biel-Tan, Ulthwé, Iyanden, Saim-Hann and Alaitoc;
- Wanderers of the Stars: brief profiles of more Craftworlds – Altansar, Il-Kaithe, Lugganath, Iybraesil, Yme-Loc and Mymeara;
- The Doom of the Aeldari: a timeline of significant events both before and after the Fall; presented with the proviso that much knowledge has been lost, this concentrates largely on the Age of Survival with important battles and discoveries listed;
- Background and details on each character, vehicle and unit available to an Aeldari army;
- A showcase of beautifully painted Citadel miniatures, with example armies featuring everything from individual images of models to battle scenes on terrain.

Everything you need to get a Craftworld Aeldari army primed for games of Warhammer 40,000 is in here:

- 46 datasheets containing rules for every Craftworld Aeldari unit and miniature;
- Army abilities reflecting the Craftworld Aeldari’s methods of war on the tabletop,;
- The Forge of Vaul: wargear both ranged and close-combat used by the Craftworld Aeldari;
- Points values for all miniatures, weapons and wargear for use in Matched Play games;
- A Lethal Elegance: rules for Battle-forged armies, including –
- Craftworld Attributes for the following Craftworlds: Biel-Tan, Ulthwé, Iyanden, Saim-Hann, Alaitoc;
- 6 unique Warlord Traits available for any Craftworld Aeldari commander;
- 5 Craftworld-specific Warlord Traits, for the 5 named above;
- 26 Stratagems, with 5 Craftworld-specific;
- Remnants of Glory: a selection of 13 rare weapons and artefacts;
- Rune Disciplines, allowing you to choose between Runes of Battle and Runes of Fate for your models with the Psyker keyword;
- 6 unique Tactical Objectives. 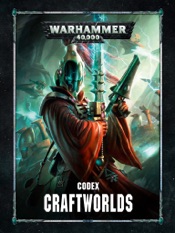