From the moment Julie sees her best friend, Gavin, in the airport, it’s like no time at all has gone by instead of months and months. No matter how long they’ve been apart, their relationship has always been steady, comfortable, and decidedly just friends. Even though their meddling parents have hung what seems like unlimited amounts of mistletoe everywhere she goes this holiday season, Julie knows some things will never change.

Gavin is well-aware his family’s wanted him and Julie to get together since forever, even though he’s been friend-zoned since they could talk—and he’s been happy to play that role. After all, as the new starting quarterback for the San Antonio Mustangs, he’s got enough on his plate without adding romance to the mix.

But between playing elves in the holiday bazaar to nights spent one-on-one watching rom-coms or soaking in their town’s hot springs, suddenly the “reverse parent trap” they’ve fallen into is actually starting to work. But this could be one scheme where letting themselves get trapped might be way too dangerous.

Each book in the Heart in the Game series is STANDALONE:
* The Wedding Deal
* The Mistletoe Trap 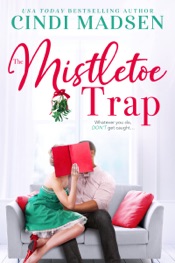