The classic travel narrative of a Don Quixote-of-the-seas – the first man to circumnavigate the world singlehandedly.
Joshua Slocum’s autobiographical account of his solo trip around the world is one of the most remarkable – and entertaining – travel narratives of all time. Setting off alone from Boston aboard the thirty-six-foot wooden sloop Spray in April 1895, Captain Slocum went on to join the ranks of the world’s great circumnavigators – Magellan, Drake, and Cook. But by circling the globe without crew or consorts, Slocum would outdo them all: his three-year solo voyage of more than 46,000 miles remains unmatched in maritime history for its courage, skill, and determination.

Sailing Alone around the World recounts Slocum’s wonderful adventures: hair-raising encounters with pirates off Gibraltar and savage Indians in Tierra del Fuego; raging tempests and treacherous coral reefs; flying fish for breakfast in the Pacific; and a hilarious visit with fellow explorer Henry Stanley in South Africa. A century later, Slocum’s incomparable book endures as one of the greatest narratives of adventure ever written.

For more than seventy years, Penguin has been the leading publisher of classic literature in the English-speaking world. With more than 1,700 titles, Penguin Classics represents a global bookshelf of the best works throughout history and across genres and disciplines. Readers trust the series to provide authoritative texts enhanced by introductions and notes by distinguished scholars and contemporary authors, as well as up-to-date translations by award-winning translators. 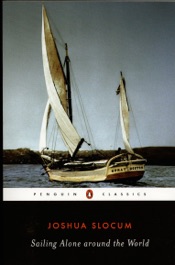