Message To The Blackman is one of the most controversial; yet, beneficial writing introduced among blacks in America. Largely unknown prior to Mike Wallace's CBS documentary of 1959, the Nation of Islam was growing into the largest self-help group of blacks in America since the early days of Marcus Garvey.

Elijah Muhammad, the leader, teacher and guide to those who are members, teaches that he had actually been taught by God, Himself, to teach a doctrine that was quite uplifting to blacks, but terrifying to whites.

The demeanor was very militant and Islamic and did not permit whites inside their meetings. Special classes transformed the worst of America's Negroes into very upstanding followers, reformed and industrious; the likes of which Christianity could never boast in 100 years.

Referred to the Most powerful blackman in America by Readers Digest, his work is still potent among the ex-slaves of America to this day. 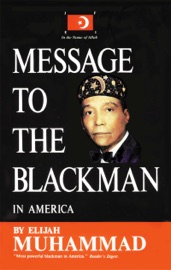