Americans' belief in their economic, political, and cultural superiority launched them on a mission to transform Latin America that has evolved into a global process of Americanization. From corporate and philanthropic initiatives to military interventions, Americans motivated by self-interest and idealism sought to reshape Latin America and gave birth to the American driven process of globalization.

Synthesizing a broad range of international relations scholarship, including perspectives from gender, race, and cultural studies, O'Brien offers a sweeping history of the Americas that ranges from the adventures of eighteenth-century whaling men to the contemporary struggle over globalization. As a part of this study, the author explains how the responses of Latin Americans to Americanization have varied from the vehement rejection of U.S. economic dominance to embracing as well as reconfiguring the icons of American consumer culture.

O'Brien's goal is to provide readers with a nuanced understanding of how the people of the Americas have shaped their own history, and influenced the development of U.S. economic, strategic, and cultural power in the world today. 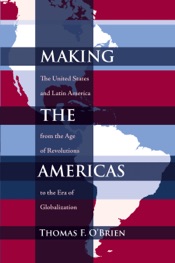